The Impact of the Conference on the Future of Europe: Youth Want Action

The Impact of the Conference on the Future of Europe: Youth Want Action 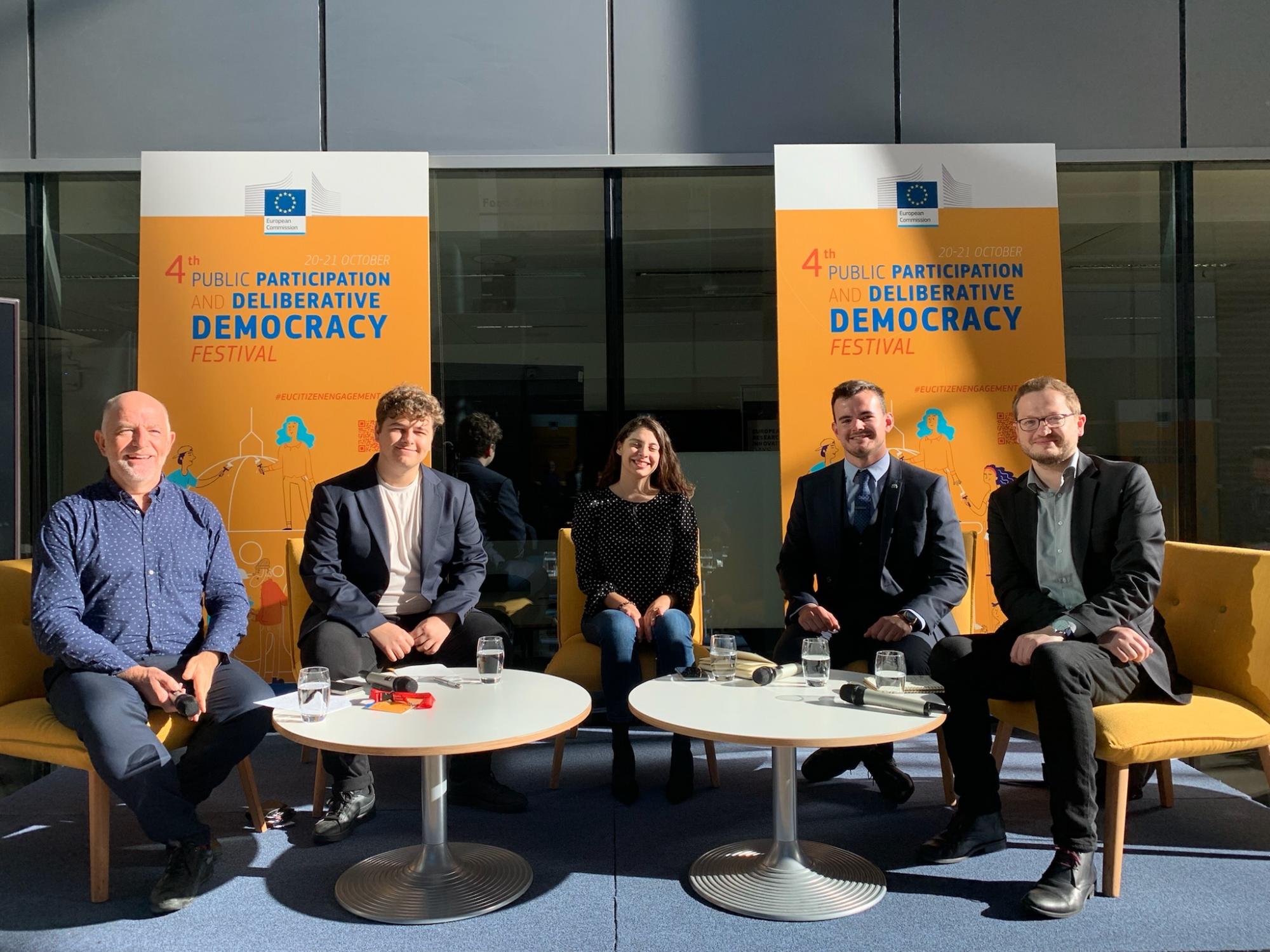 Caterina, Nicolas, Kacper and Matous... four young Europeans, with four different views towards the European Union, but who have all experienced the Conference on the Future of Europe (CoFoE). All four were invited by Missions Publiques to join a panel of the 4th Participatory and Deliberative Democracy Festival on October 21st, 2022, organised by the Joint Research Centre in Brussels. The Conference was a turning point in their lives as young European citizens. They now expect the institutions to live up to the hopes raised by this unique process.

All four participants, aged from 16 to 25, and among the youngest participants of the Conference, have learned from the process. Caterina, who comes from a small town on the Croatian coast, now works for the “Youth in the EU” association, which promotes Europe to young people in schools and through various events. Though she is familiar with the European institutions, she realised during the CoFoE that decision-making is "complex" and time consuming, which is not compatible with the enthusiasm of young people and their urge to take rapid action regarding climate emergencies.

For a year, she organised and participated in local dialogues in Croatia with young people as a national representative of the Conference. "Young people don't know about the opportunities Europe offers. Through this empowerment tool, we open perspectives to them that they did not expect”. Today, she says that inviting young citizens directly into institutions was a "courageous" act because today’s youth is somewhat apprehensive about the future. She was impressed by the quality and concreteness of citizens' recommendations, which were directly linked to their daily living experiences. "These times of exchange and sharing between those who think about politics and those who are the subjects of it are indispensable. It’s a real breath of fresh air". She was also pleased that the particularity of islands was recognised in the final proposals, a precious perspective since her country is made up of 1,400 islands.

Nicolas was 16 when he received the call from the EU, in his parents’ home in Czech Republic. One year later, he is now studying to become a high school teacher. What did he know about Europe at the time? Not much: "I only knew that the Czech Republic was part of the European Union. I was not interested at all. It [the Conference] was an educational experience. I learned so much about the institutions, projects and opportunities for young people after 18". If Nicolas had one subject close to his heart, it was dental health. "In the Czech Republic, there are too many dentists working in private practices. Access to such services is far too expensive (...) When I researched and discussed this in my working group, I realised that this is a Europe-wide problem.” A year of debates and meetings at the heart of an unprecedented process has changed the young man: friendships from all over Europe and a desire to get involved... in politics.

Matous, 20, also comes from the Czech Republic. For him, "many people confuse Europe with the European Union". The Conference taught him the nuance and "what the EU does for us".

The process, however, had its limits, and that is the beauty of an unprecedented exercise. What are the drawbacks noted by the younger generation? "I was not very comfortable with the final recommendations; I had doubts about many of them because the citizens chose consensus and did not dare to assume their divergence openly in plenary.” Matous, who was in the working group on “democracy in the EU”, regrets that the desire for consensus erased the rough edges of the debates, and that the "yes" of a relative majority always prevailed. “Citizens in the Panels were not representative of the diversity of political opinions in Europe. Those who attended were rather Europhiles. And what do we really put behind the word ‘unity’? When I asked about the euro, prices, and taxes... I didn't get an answer. For the moment, in the Czech Republic, we don't want the euro because we will lose out on salaries.”

Although he is not totally convinced of the effectiveness of such a participatory process at a European scale, he would like to test such formats in the Czech Republic at a more local level, to be initiated by the country's government, as in France or in Ireland.

Caterina’s only regret: the "division" she felt between the citizens who were members of the Panel and the 27 national representatives. “We were not in the same dynamic from the start, and we collectively felt we should have known the process beforehand to be able to plan or strategize our contributions and interventions.”

Nicolas is more sceptical about the political follow-up on the proposals, especially on climate issues. "Although everyone agreed on the importance of the subject, I have the impression that it was not really taken seriously by the decision-makers, particularly in the plenary sessions.”

Kacper is a 23 years old Polish student, who was very sceptical about citizen participation and the Conference in the first place, and who was “afraid to come as a Pole, because Poland is not well regarded in the EU”, he says. “But I had a voice, and I was listened to”. If he considers his voice has been heard by policymakers, he regrets the people from his country didn’t hear it: “the lack of media coverage in the member states was a mistake: Polish journalists never mentioned the Conference.”

"I learned that our generation, which is very concerned about climate change, is sometimes referred to as 'gloomers' due to the impending consequences of climate change that concern us all. Yet, I am an incurable optimist. I hope and trust that Europe will become more agile and less bureaucratic, anticipate more, and less in the reaction”, says Caterina.

But most importantly, all want to know that their work “served something” and eagerly await an official response from the three European institutions.