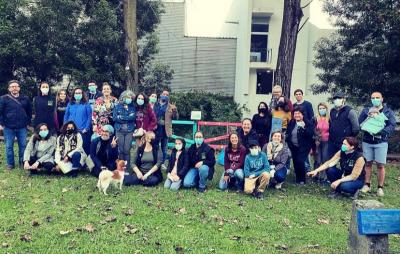 The Municipality of Valongo is part of the BiodiverCities project, a network of European cities that aims to involve citizens in the co-creation of greener cities. The main objective of the pilot project has been to develop a roadmap to improve the biodiversity and green infrastructure of European cities by 2030. This should be realised through the participation of civil society in decision-making with the aim of building a joint vision of the green city of tomorrow.

Despite the presence of large green areas, mainly forestry, the city of Valongo has few large urban green spaces, and those are not connected to each other. Moreover, the  local community is not yet fully aware of the importance and value of these spaces and of biodiversity in the urban context.

Changing this situation requires different actors to recognize the value and importance of biodiversity protection, in defining new proposals for its fruition and in experimenting with new practices.

Therefore, it is fundamental to consider a more comprehensive view of democratic participation (more than simply voting), which could contribute not only to the reinforcement of democratic legitimacy, but also be a way of enhancing and aligning the means and motivations of the different actors in collective action, and a way of collectively generating new solutions to contemporary problems.

Thus, the active involvement of the community in this project enabled a dialogue about how to promote more intense forms of interaction between the local community and the existing natural and patrimonial biodiversity.

The participative methodology adopted, aimed to ensure the active involvement of the local community in all phases of this project, and was intended to function as a co-creation process focused on building a common vision of the territory, which requires opportunities to exercise participation in a collaborative way, placing citizens as active agents in the decision-making process and, consequently, strengthening communities capacity to responsibly managing the territory's common resources together with the competent authorities.

Taking into account the coexistence of dense urban areas with large ecological structures in Valongo, it was considered important to create mechanisms of interpenetration/dialogue/articulation between the city and nature. Through experimentation and the articulation of ideas and actions between the municipality and the citizens, the implementation of this project has contributed to the appreciation and appropriation of green spaces and local ecological corridors.

Policy Stage
Not applicable
Context of activity
Part of a policy development process (initiated by a DG or EP)
Science or Policy Field
Environment
Specific Topic
How to engage citizens in building a vision for urban nature, and solutions to improve urban biodiversity.

How were the Participants selected?
Volunteered through an open call
Direct contact
Through what means citizens knew about the call for participation?
For each action, an email inviting participation was sent by the Mayor of Valongo. The activities were also announced on the official social media account (Facebook) of the City Hall and then shared with local groups active on issues related to the environment and territory.
In addition to contact through email and social networks, door-to-door dissemination was carried out with the distribution of invitations to participate close to the locations where the actions took place.
A page dedicated to BiodiverCities was also created on the official website of the municipality, where the results and images of the events promoted are published

Events
5
Methodologies used
Co-Design
Focus Groups
Surveys
Other
Experimental actions
Methodology description
The project's participatory model is based on the construction of spaces for dialogue that allow participants to share their contributions in groups, led and mediated by the expert and a local team.
The organization of these group dialogues made it possible to listen to everybody and to deepen the themes; that promotes a culture of commitment and allows citizens, local actors, and technicians, to dialogue in an apparently informal register, differently from institutional communication models with public entities. This model also allowed to put the focus on collective interest to prevail over individual issues
In each session, (i) a shared diagnosis that identified the local resources and existing problems was produced, (ii) a vision for the future of the territory (iii) a set of proposals that could contribute to the realization of the vision, and (iv) the definition of experimental actions to be implemented by the participants.
A set of experimental actions were implemented, which worked as a test for the community's proposals for further evaluation and possible inclusion in policies to promote urban biodiversity in the municipality of Valongo.
The experimental actions followed the principles of tactical urbanism that emphases action: quick actions that allow short-term results, and small-scale actions that allow intervention yet with a greater awareness of local specificities.

Output
Action plan
Media product
Report
Main Outcomes and Lasting Achievement
Community mobilization (citizens, local agents, municipal technicians, and decision makers) to participate proactively in the discussion on the importance of biodiversity, in the definition of proposals and in the experimentation of new practices.
Production of a diagnosis and collective proposals for the promotion of local biodiversity through participatory sessions whose results were made publicly available on the project page.
Production and dissemination of knowledge through the realization of a bioblitz and a guided tour by an expert, and the creation of a do-it-yourself manual for the promotion of biodiversity. All contents are available on the project page.
Transformation of public space by carrying out two experimental actions, co-created and implemented by the community, with the aim of increasing biodiversity in these places, namely through:
DEBARKING ACTION - technique to combat and remove invasive species;
CREATION OF POLLINATOR BEDS in a local garden - fundamental for pollination and seed distribution, which contributes to the perpetuation of fauna and flora species and environmental balance;
CONSTRUCTION OF INSECT HOTELS in a local garden - that aims to protect and create conditions for the reproduction of pollinating insects such as butterflies, ladybirds and flower flies.
GREEN BALCONIES: plants were distributed to residents to place on their balconies.
REVEGETATION OF PLANTERS AND FLOWER BEDS in a public square, and the adoption of these spaces by the community to enjoy and take care of them in the future.
How were the outcome taken up within the process they were carried out?
To build and share knowledge on the local territorial reality, the first participatory sessions were organized in February 2021 and entailed listening to municipal technicians and local associations/agents on the promotion, enhancement, and preservation of biodiversity in an urban context. The two sessions involved around 56 participants, who identified the resources and problems associated with biodiversity in Valongo.
The first event of the second phase of the participatory process, namely Experimental Actions - was organized, resulting from the proposals of the participants from the participatory sessions held during the previous phase of Diagnosis and Proposals. This event consisted in a BioBlitz - a walk through the green corridor of the city of Valongo, which connects the City Park to the Youth Park, where participants, accompanied by a biologist, were challenged to identify the local fauna and flora and suggest ideas to promote urban biodiversity.
After analyzing the contributions collected through the BioBlitz, actions to be implemented and the location where to implement them, were selected. A garden located in a residential neighborhood in Valongo's green corridor, that was chosen. This choice was made to encourage residents to adopt the space as a community place, and to allow the actions to be implemented simultaneously and in proximity, facilitating the monitoring of each experimental activity. This first experimental action took place in November 2021.
Following the methodology previously used, a guided walking tour and survey of proposals was organized to gather information for the implementation of the next experimental action. This initiative took place in April 2022, in Ermesinde, a parish in the municipality of Valongo, thus extending the BiodiverCities intervention to other territorial contexts within the municipality. The motto of this initiative was how to bring biodiversity into the urban context. During the tour, participants were invited to get to know and evaluate different public spaces as well as the gaps between these spaces and possible interventions to promote biodiversity and, eventually, create connection corridors for biodiversity.
After analyzing the contributions collected through the guided walking tour, actions to be implemented and the location where to implement them, were selected. The choice felt on the public square near the local train station, where there is a children's playground, which was the place where participants considered having less biodiversity.This experimental action took place in July 2022.

Main Challenges
Practical and methodological difficulties in the implementation phase
Reason for such challenges and solutions
The inclusion of participatory processes, co-creation and experimentation in urban practices and policies implies new forms of thinking and planning the city, through governance processes that challenge the status quo and that may contribute to reorganizing territorial planning. Also, this type of methodology requires time, resources and technical skills that are not easy to gather and that need time to be acquired.
Thus, political support is essential for the realization of a project of this kind. In the case of Valongo, the decision-makers took the risk associated with the implementation of an experimental methodology whose results are based on co-created interventions, in a dynamic process where citizens, local agents and technicians – although holding different roles - are challenged to find common languages that allow them to jointly establish objectives, methodologies, implement projects and measure results.

Lessons Learn
Citizens not only want to react as a form of protest, but also to proactively participate in the discussion of city models, in the identification of common projects and in the experimentation of solutions to the everyday problems.
Sharing and co-creating results (small steps and milestones) with citizens, stakeholders and decision-makers is essential to understand and intervene responsibly in the territory.
The promotion of urban biodiversity should involve the dialogue between the city and its citizens with nature, through the co-creation of ideas and experimentation of actions by the municipality, specialists, and citizens, which may contribute to the awareness, appreciation, appropriation, and development of biodiverse spaces in the urban areas.

Recommendation
Rethink territorial management instruments and create new collaborative forms of planning towards a more strategic, dynamic, flexible, participative, and intelligent approach
Promote and allocate resources for continuous dialogue between technicians, politicians and citizens through more heterogeneous processes (geographies, thematic areas and age groups), on current issues, incorporating inter-, trans- and multidisciplinary perspectives.
Develop research on the role of authorities, institutions, and the community, in general, in co-creation processes, to develop tools and practices that contribute to strengthening the legitimacy of decisions and lead to greater commitment between the parties involved.